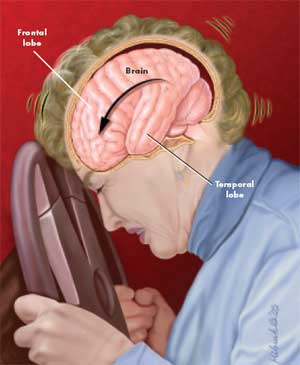 The injury law attorneys and brain injury attorneys at Dolman Law Group have served up an excellent summary of this important medical breakthrough. Enjoy.

A Canadian doctor has recently discovered an innovative approach to detect concussions by administering a simple blood test. The test can ultimately predict, within an hour after an impact to the head, how severe the head injury may be. This could ultimately prove extremely useful in the arena of professional sports where post concussion syndrome has drawn significant media attention in recent months.

Dr. Linda Papa, a Montreal resident leading a U.S. National Institutes of Health-funded research project at the American Trauma Center, has found that the brain releases a specific protein after a head injury, which can be detected in a blood test.

According to Papa and her team, each year around 1.7 million people in the United States experience a traumatic brain injury (TBI). A Concussion, or mild traumatic brain injury, is often tricky to diagnose. Even a CT scan may miss subtle, microscopic bleeding areas of the brain that, if remain undetected, can lead to the fatal swelling of the brain, especially if the patient sustains an additional head injury before fully recovering from the first.

Papa, an emergency physician, has heard the story numerous times; patients returning home with an uneasy feeling.  The victim becomes forgetful and has difficulty concentrating, with levels of anxiety increasing for no apparent reason. Everybody assures them that they’re fine because the CT scan results came back normal. As a result, no therapy is recommended.  This happens more often than you think in the context of closed head injury cases.

There is also an increasing concern surrounding the unnecessary exposure to harmful radiation from repeated scanning of the head. Remarkably, the study found that a high level of the associated protein was found in patients with abnormal CT scans.

So what actually triggers the protein to be released into the blood stream? Well, after a head trauma, the barrier around the brain (blood brain barrier) is typically damaged as well, allowing the proteins to leak out into the blood.

Other studies have shown that certain proteins studied in brain injuries have also been found within our bones.  This complicates things because if a patient has a brain trauma along with a broken arm, doctors will be unable to detect if the protein is stemming from the broken arm or the brain.

Papa’s team has shown two distinct proteins were higher only in patients with a brain injury. Patients who were able to walk away from the accident had almost no levels of the specific proteins in their blood.

Papa states that, “The key is, could these proteins tell us in advance how severe the head injury is, and is this patient going to require some kind of neurosurgery?”

Further research is required to validate the discovery, but Papa believes that a blood test for concussions will be readily available in emergency divisions within five years.

It is extremely important to consult with a qualified Florida traumatic brain injury attorney if you, or a loved one, have sustained a Traumatic Brain Injury (TBI) as the result of another’s negligence. Please contact: matt@dolmanlaw.com or call Dolman Law Group today at (727) 451-6900.